The 2022 Toyota Sienna has plenty of features that can rival the sea of ​​SUVs, and its hybrid powertrain delivers truly impressive fuel economy.

Toyota’s 2022 Sienna has a lot to love. For starters, this capable minivan seats up to eight people and offers plenty of storage and cargo space. It’s only available with a hybrid power package, but that means you get great gas mileage in this capable hauler. And given the recent rise in gasoline pricesthat’s a big plus in our book.

Along with three rows of seating and that fuel-efficient hybrid engine that destroys the competition with around 36 mpg in the city, the Sienna sports styling cues that won’t get in your way of parking this minivan in the front of the lot.

In fact, for buyers eager to take a second look at the Sienna, this minivan might just attract a few skeptical drivers once they rank it against other limited offerings in the minivan segment.

The 2022 Toyota Sienna is available in six models: the base LE, a Woodland Edition with all-wheel drive, three other upgraded models and the top of the range Platinum. Depending on your use case, the Sienna can stick to the curb or take you to your next camping car simple adventure.

Prices range from under $35,000 to over $51,000 depending on configuration. We recently tested the base LE and were impressed that even this base van was still packed with the right stuff.

Toyota realized that buying a minivan might not be the most bragging-worthy vehicle purchase, so it designed a more aggressive look for the 2022 Sienna.

Say goodbye to the flat sliding door panels that make most minivans look like boring cargo haulers. Added flares and creases give the Sienna rugged styling without losing the aerodynamics of this big-box hauler.

Since car manufacturers have been offering SUVs with third row seatsthe need for large capacity minivans decreased. But let’s face it, in many of these SUVs, the third row isn’t the most spacious, and cargo space behind the third row is minimal. Not so with the Sienna.

The two-row third-row bench seat is designed to easily fold into the floor. When the seat is up, these deep floor wells can hold a ton of luggage and essentials. I put this to the test on a recent trip to Northern California. We took the base-model Sienna LE out for a weekend with four adults, two kids in car seats and enough luggage to overwhelm any bell captain.

If you’re looking strictly for cargo space, fold the rear seats and slide the center seats all the way forward for plenty of space. The only downside to the Sienna is that the middle seats aren’t removable.

However, Toyota has cleverly mounted them on long slides so you can move the seats completely against the two forward cabin chairs to maximize floor space. But permanent seats limit your cargo options.

Toyota offers optional captain’s chairs for the second row of the Sienna, reducing the seating capacity to seven. The standard bench seat gives you room for eight. 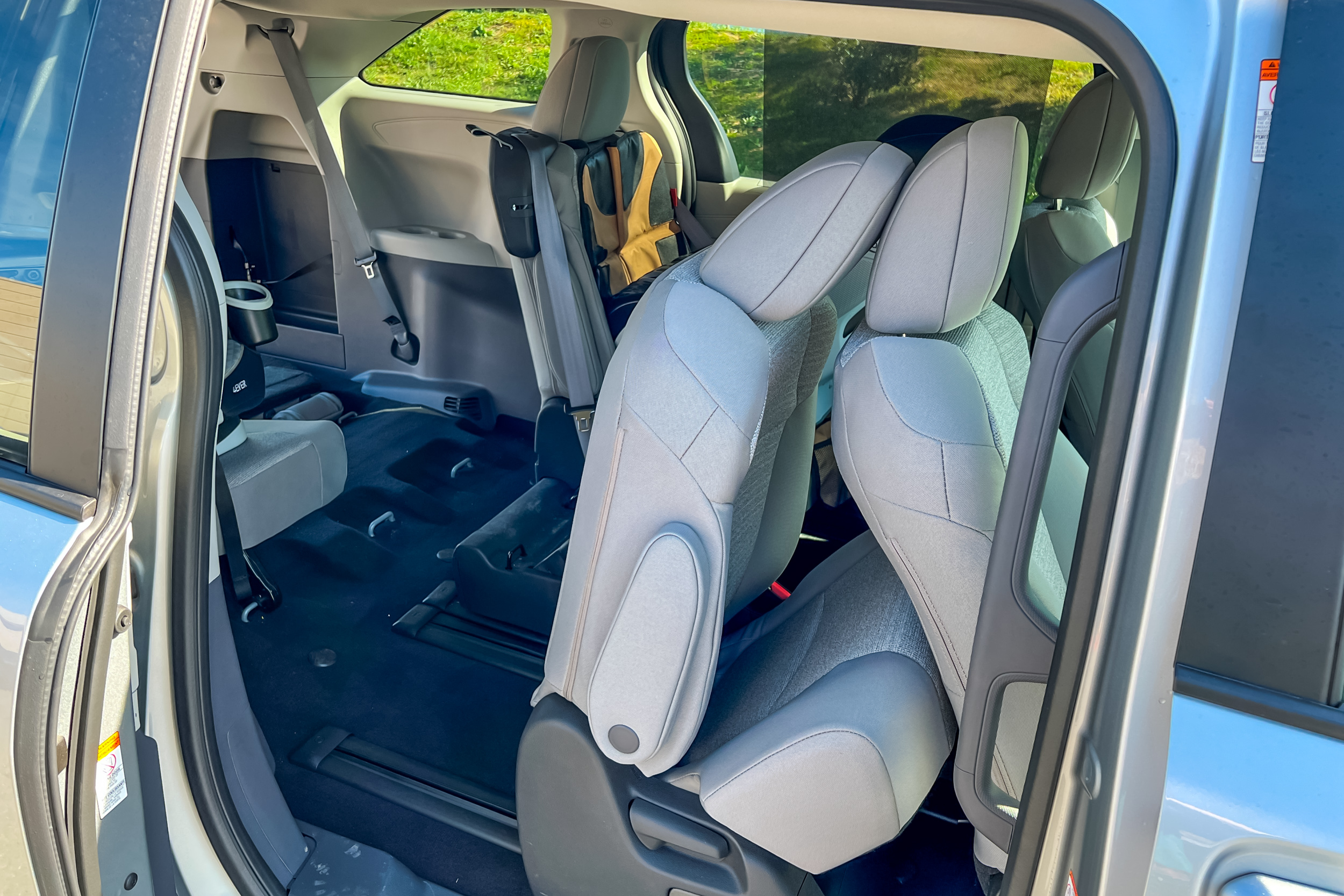 If you opt for the standard bench seat for the second row, you benefit from additional practical features. The narrow center seat can easily be removed from the bench seat, allowing the two outer seats to act as quasi-captain seats. It also gives you easy access to the third row.

Two additional floor-mounted cup holders give you (and your passengers) a total of 18 cup and bottle holders. If you prefer, each side seat folds up and easily slides forward to allow similar access to the third row.

The interior of the Sienna features a fairly standard Toyota utility look. Two instrument gauges flank a customizable 4.2-inch central information display. A larger 9-inch screen in the center of the dash controls navigation and music and displays vehicle information. The Sienna is compatible with Apple CarPlay, Amazon Alexa and Android Auto.

The audio system is basic with six to eight speakers but is sufficient to drown out road noise. Six USB charging ports should keep everyone’s electronics charged and ready to play for those long family drives.

Toyota only offers the Sienna with one base hybrid engine. But what a thrifty package it is. The gasoline engine is a 2.5L 4-cylinder that produces 245 net horsepower from the hybrid system. Base models feature dual electric motors for the front wheels, while upgraded models also include a rear motor.

The base engine gets an EPA-rated 36 mpg city and highway, while upgraded minivans are rated at 36 city and 35 highway. In our testing, we consistently saw mileage in the upper 30s and once hit close to 45 mpg, although that’s not the norm.

5 reasons why minivans are the ultimate adventure rigs

The van is full of juxtaposition. It is perhaps the most versatile and practical vehicle on the market. Yet he’s also the most stigmatized and unloved of Americans these days. Read more…

Despite the minivan’s bulk and carrying a full load of passengers, the Sienna was still able to easily reach highway cruising speeds and blend into traffic. It won’t dazzle anyone leaving a red light, but it sure does look pretty at the gas pump.

This gas tank holds 18 gallons, so you can easily achieve over 600 miles of range on a single tank – great for long road trips or getting away from civilization for a weekend R&R . Most other minivans get a really disappointing 19-17 mpg around town.

Even the Chrysler Pacifica the hybrid version only gets 30 mpg for combined city/highway use and starts at over $56,000. The EPA estimates that the average fuel cost for competition will be at least $1,000 more each year if gas averages $4.10 per gallon. Let that sink in for a minute!

Toyota engineers use an electronically controlled CVT (continuously variable transmission) in the Sienna. This means you won’t have to deal with difficult downshifts or upshifts when driving over hilly terrain as the transmission searches for the right gear.

Instead, with a CVT, the transmission slips smoothly into the correct gear. And I found the Sienna handled the hills of San Francisco and Yosemite without breaking a sweat—or breaking a neck.

Toyota measures cargo space behind that third seat at 33.5 cubic feet. Roll out the third row and that space expands to 75.2 cubic feet. Slam the second row of seats forward with the front seat as far back as possible, and you have just over 100 cubic feet of space to work with.

Whether you’re hauling a full load of gear or snapping around a campsite, the rear cargo area should give you plenty of room to work.

If that’s not enough, add a trailer hitch and the Sienna can tow up to 3,500 pounds. Or throw a rack on the hitch or the roof and you’ll be ready to transport all your toys too.

The 2022 Toyota Sienna minivan comes with a set of features that become more and more useful the more you use them. Push-button start means you’ll never have to take the keys out of your pocket or purse. The side doors are electrically sliding with a one-touch sensor in the door handle – very useful when dragging a child or two.

Stacking the Sienna Against the Competition

If you’re sold on the concept of a minivan, your choices are limited. Outside of Detroit, you can only get the Chrysler Pacifica. Import competition includes Kia Carnival and the Honda Odyssey. And compared to those options, the Sienna’s award-winning gas mileage alone is a compelling selling point.

If you want a minivan to haul your crew and cargo, the 2022 Toyota Sienna is an attractive option with tons of space and is as versatile as many SUVs. Toyota advertises that the Sienna is more than enough, and we’d agree with that assessment. check it out for you.

Volkswagen is finally rolling out the long-awaited replacement for its iconic Microbus – via the new ID. Buzz won’t be going to the United States for a year. Read more…
Facebook
Twitter
Pinterest
LinkedIn